The monograph should be seen as an attempt to present changes affecting the category of family farm owners in Poland over the last 70 years, since the end of World War II. These changes brought significant social transformations, including the dismantling of the landowner class (who had large agricultural farms in their possession), moving the state border westward and changing the multiethnic Polish society into one close to ethnic homogeneity. The main goal of this reflection is to recount ways in which family farms coped with various unfavorable forces and factors in order to remain in operation. One could say that the entire study can be viewed as a manifestation of the well-known phrase that served as the title of the James C. Scott book (1990): Domination and the Arts of Resistance. The monograph presented here refers to these analyses stemming from another edition of sociological research, completed within the framework of the MAESTRO project financed by the National Science Center of Poland. The main goal of the project was to depict the functioning of agricultural family farms as the traditional sector of agriculture in Poland in the contemporary context of globalization processes. The farms were examined in terms of the principles of sustainable development as well as flexibility and resilience in reaction to various crises. The monograph is divided into four essential parts. The first part is devoted to the theoretical issues and methodological groundwork for the entire publication. The second part of the book aims to capture the changes that took place from 1994 to 2017, which was an adequate period to encompass the changes and metamorphoses that mostly happened as a result of two things: the regime transformation which began in 1990, and Poland’s accession to the European Union on May 1, 2004. The third part deals with the crucial issues of regional variations, mostly in regard to life strategies and strategies of operating agricultural farms. Finally, there is a fourth part which places the focus on select themes, such as rural lifestyles, food safety and security, farmers’ utilization of new computer and IT resources, and the potential for socio-political mobilization. Krzysztof Gorlach (first editor and contributor)—received an MA in sociology in 1978 from Jagiellonian University in Cracow, Poland and was awarded his PhD in sociology, also from Jagiellonian, in 1986. In 1995, he successfully completed his postdoctoral examination, becoming a professor in the Department of Philosophy at Jagiellonian. His academic interests revolve around rural sociology generally and, specifically, the sociology of agriculture, social structure, and social movements. He currently works as full professor at the Institute of Sociology at Jagiellonian University. He heads the research project “Think Locally, Act Globally: Polish famers in the global world of sustainability and development.” Zbigniew Drąg (second editor and contributor)—received an MA in economics in 1983 from the Academy of Economics in Cracow (now Cracow University of Economics) in 1983. Three years later he also received an MA in sociology from Jagiellonian University in Cracow. He also earned his PhD in sociology from Jagiellonian in 1998. His research interests include: macrosociology, theory of elites, issues of democracy and political propaganda, as well as the methodology of social research. Zbigniew is employed as an assistant professor for the research study “Think Locally, Act Globally: Polish famers in the global world of sustainability and development.” Anna Jastrzębiec-Witowska (first collaborating editor and contributor)—received her PhD in humanities/sociology from Jagiellonian University in Cracow, Poland in 2010. She received an MA in European studies in 1999 from the University of Exeter in England and an MA in sociology in 1998, also from Jagiellonian. 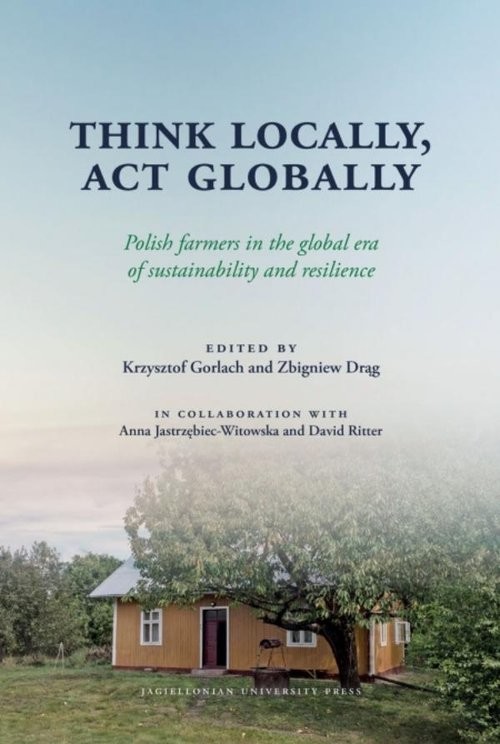